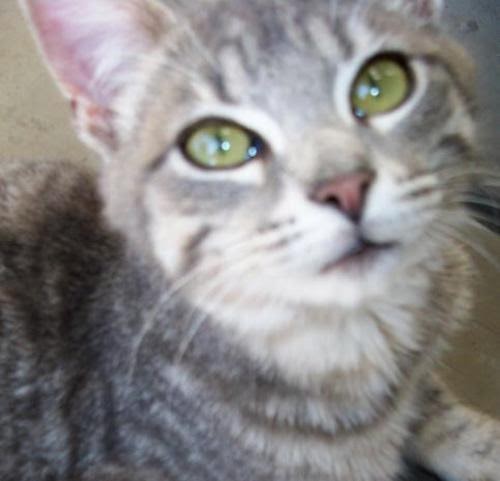 Conroe was a normal kitten but he lived on a street where no one cared much. One day a child grabbed him by the tail causing severe nerve damage at the base of the tail. Someone picked up the injured kitten and took him to the Animal Shelter. The damage was such that the tail had to be amputated, but after the surgery the shelter staff observed that he had lost control of his urination and bowel movements. They considered him unadoptable and decided to euthanize him. At the very last minute, however, a Cats' Angels volunteer asked for and was granted custody of the kitten.


After weeks of medication and intensive care, Conroe recovered total control of his bladder but still could not control his bowel movements: he was constantly dripping poop. The vet said he was young enough that he could continue to improve, and we didn't give up hope. We figured that if we fed him a diet of raw meat that resembles what cats eat in the wild without the fiber and fillers that make up most commercial foods, it might be easier on his digestive system and make healing possible. We were right: within days of being fed a raw diet, Conroe improved dramatically. It was like a miracle. All the volunteers had fallen in love with this adorable and spirited kitten and we were overjoyed: Conroe was now adoptable and he would not have to die. He is now a happy kitten, playful and loving and free of pain. He has been adopted by a very special person who will continue to keep him on his successful diet.
Posted by Danielle at 10:41 AM